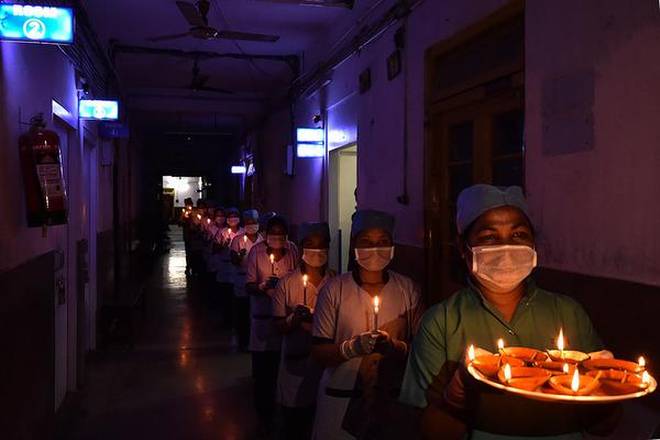 New Delhi April 06, 2020: People across the country switched off lights in their houses and lit lamps at their doors and balconies in solidarity with the rest of the country in combating COVID-19 at the call of Prime Minister Narendra Modi.

Mr. Modi had, in a video message last week, asked Indians to light a lamp or flash a torch from their mobile phone at 9 p.m. on Sunday for nine minutes. The Prime Minister lit a lamp at his official residence at 7 Lok Kalyan Marg and tweeted a Sanskrit verse, seeking health and prosperity for all and the defeat of all enemies.

Mr. Modi wore a white south Indian mundu (dhoti) and an Assamese gamocha (towel) and lit a traditional oil lamp from south India. This was to convey, sources said, solidarity with all corners of the country.

Union Health Minister Harsh Vardhan lit a lamp along with AIIMS doctors and staff, whom he called “Corona warriors”, on the Delhi campus.

‘Victory of good over bad’

“Let the brightness of the lights ignite our energies and ensure the ‘victory of good over evil. My prayers go out for all those million homes across the planet who are suffering because of coronavirus,” he said.

As the clock struck 9, lights went out in most houses and people gathered in balconies and at doors, flashing lights, while many lit candles and lamps. The sound of fireworks, conches, beating of vessels, whistles and police sirens broke the silence of the lockdown. At some places, Hindu devotional songs, mantras and the national anthem were also played.

The event passed off without any disruption to the national electricity grid after the government and utilities put in place elaborate plans to deal with the sudden drop and then a quick spurt in demand.

You may be alone at home but 130 crore people are with you, he had said while making the appeal to fuse a sense of unity and purpose among people during the ongoing lockdown.

The Prime Minister had earlier asked them to clap or beat utensils on March 22 for five minutes at 5pm while observing ‘janta curfew’ from 7am to 9pm to thank those working in essentials services.

The overall death toll in the country due to the novel coronavirus pandemic rose to 83 and the cases climbed to 3,577 on Sunday after 505 new infections were reported in the past 24 hours, according to the Union Health Ministry.

India has been on a 21-day lockdown from March 25 to check the spread of coronavirus pandemic that has claimed over 83 lives in the country and 65,000 globally, while more than 12,00,000 declared cases have been registered in 190 countries since the epidemic first emerged in China in December 2019. 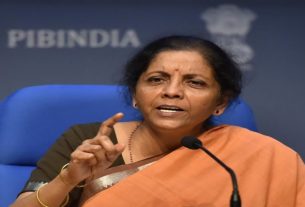 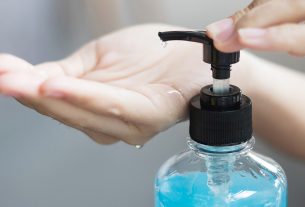 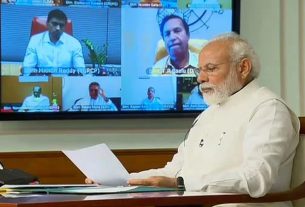